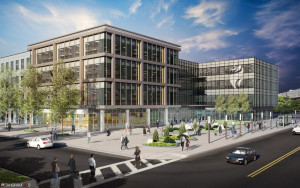 A vacant parcel in Boston’s Seaport District that gained notoriety as home to an 8-story-high snow farm during the winter of 2015 will be developed as a speculative 125,000-square-foot office and lab complex.

Boston developer Related Beal and Danvers-based Kavanagh Advisory Group are partnering on the project. The two sides have hired JLL’s Boston office to market the first of two buildings planned at 6 Tide St. The project will be known as Innovation Square Seaport (iSQ Seaport).

The 4.1-acre site is owned by the Economic Development and Industrial Corp. of Boston.

The Boston Redevelopment Authority approved plans for a 4-story, 355,000-square-foot research and development and/or manufacturing facility in 2013. The developers are targeting a January 2018 completion date for the first phase, said Matthew Powers, an executive vice president for JLL.

“We’re getting a lot of activity on it,” Powers said. “This is a relief valve for Cambridge, and that’s exactly what we’re seeing right now.”

The timing could be right for expansion by a major life science company in the Seaport District. Cambridge-based Vertex Pharmaceuticals agreed to relocate to a new 1.1-million-square-foot headquarters at The Fallon Co.’s Fan Pier property in 2011 after being offered $22 million in state and city tax breaks. The Innovation and Design Building on Drydock Avenue also has attracted smaller life science companies, including Immunetics, Ginkgo Bioworks and Boston Bioskills Lab.

Robert Coughlin, CEO of the Massachusetts Biotechnology Council, said the project could create a second life science anchor on the eastern end of the Seaport District.

“We need more inventory and we need all of the other clusters to succeed, not just Kendall Square,” Coughlin said.

The availability rate for lab space in Cambridge’s Kendall Square is currently 1.7 percent, according to research by Boston-based tenant representation brokerage Cresa.

“It isn’t slowing down, and it’s not just biotech or therapeutics,” Coughlin said. “GE Healthcare came here (to Marlborough) and that led to the GE headquarters. That was the shot heard around the world, and now everybody in the digital health space is looking.”

Even with East Cambridge lab rents climbing into the mid-$70s per square foot range, many life science companies remain committed to a Cambridge address, said John Coakley, a senior vice president with Cresa.

“There’s more inventory out on Route 128, but a lot of companies resist going ou

During the winter of 2015, the property was requisitioned by Boston public works as a dumping ground for truckloads of snow removed from city neighborhoods. The pile reached heights of 75 feet before finally melting away on July 14.