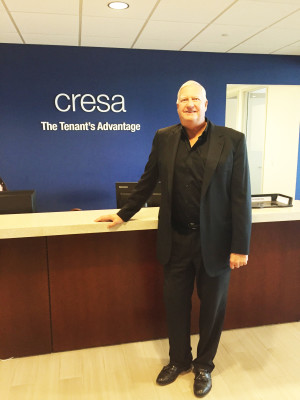 Just as buyers’ agents have carved out a niche in the residential real estate industry, Boston-based Cresa has grown by specializing in tenant representation in commercial deals. Bill Goade worked in the corporate real estate departments at Wang Laboratories and Digital Equipment Corp. before co-founding Cresa Alliance in 1993 and Cresa Partners in 1998. Now the largest tenant representation firm in North America, Cresa topped $300 million in 2015 revenues. The company is focusing on international expansion in 2016, opening a new office in Paris and planning five more offices outside the U.S. this year. Cresa’s CEO from 2006 through 2013, Goade retired as chairman on March 31.

Q: Why did you make the switch from the corporate side of the real estate business?

A: There were two things that got me into this business. In 1985, I wanted to go out on my own. I’d been doing corporate real estate at Digital Equipment and Wang Laboratories and that was the business I knew. And secondly, I wanted to get into residential development. The market collapsed in 1986 and 1987 to the point that had I been successful in all the bids I’d made, I would be bankrupt like everybody else. Fortunately I was smart enough not to overpay for anything.

Q: What made you think a tenant-based representation model would be successful?

A: That’s all I knew, so I did see a niche. All the other firms were landlord-based. There really wasn’t anybody representing just the tenant. I knew about the conflicts of interest. I became more aware of it the longer I stayed in the business. It’s been a great niche for us. We’ve always done well here in Boston. We expanded nationally and now internationally as well.

Q: What’s the biggest change you’ve seen in the role of brokers?

A: Information is now ubiquitous. Thirty years ago it was more difficult to acquire, so that was a big part of the broker’s value. Now anybody can get that. We have to add value by services. Our original name was Corporate Real Estate Advisors; we’ve always had that philosophy. We have to advise them on accounting rule changes, because that’s a big deal. Buying versus leasing right now is becoming a more relevant analysis than it has been for years because accounting-wise you have to treat them the same. You have to read leases and negotiate the entire lease, not just the rent, how the building lays out and how the improvements are made. That’s something some brokers do, and some don’t. A professor at Wharton said a good business should be ethical, enjoyable and economical. At Digital, the comment from Ken Olsen that always got passed down through the ranks was, “Do the right thing.” That stuck with me. So when I got my own company, we started with, “Do the right thing, have fun, make money.”

Q: How do you decide which international markets to target for growth?

A: We’re targeting Paris in Q1; we opened London, Amsterdam, Brussels, Hungary, Hong Kong and two offices in Australia. We have five more to go this year. It’s difficult to expand overseas because they haven’t got the tenant model over there, or very few people do it. So in some places we use the best-in-class advisors that we can find. But I think we’ll end up most places we need to be. When we started in the U.S., we focused on 20 markets. We’re doing the same thing internationally: we’re trying to get to 20 markets. There are a lot of similarities. We try to find somebody in every market that shares our philosophy.

Q: Where is most of the revenue growth coming from?

A: It’s still mostly the U.S. We’re growing in the New York area, our D.C. office continues to grow. In L.A. we had a big growth spurt and merger there. Boston is growing, but it’s more like 10 percent a year.

Q: Boston’s commercial real estate market seems to be hitting on all cylinders, but where are the vulnerabilities?

A: There’s one thing I know: real estate is a cyclical business and there will be a correction at some point. Generally it’s somewhere around seven years of up and five years of down. What’s kept Boston up is medical technology and education and financial services. The difference today is so many people want to be downtown or Cambridge in terms of the lifestyle and amenities. The younger workers want to walk from a subway station or walk to work. So I think at some point we may get a touch of overbuilding and a softening, but I think the softness will be in the suburbs first. Historically you get a rent differential that approaches $30 (per square foot), and then people start thinking about the suburbs again.

Q: As you represent tenants, what effect have you seen from the recent ownership changes of Boston office buildings in favor of institutional investors?

A: The market is still diversified enough that the tenant has alternatives. The best asset a landlord has is a good tenant. So the tenant still has power. Sometimes they have to move and exercise that power. Most of the landlords in Boston are good landlords and want to treat them fairly, so you’re able to negotiate a fair transaction. There was a time a couple of landlords thought they could push the market themselves, and they couldn’t.