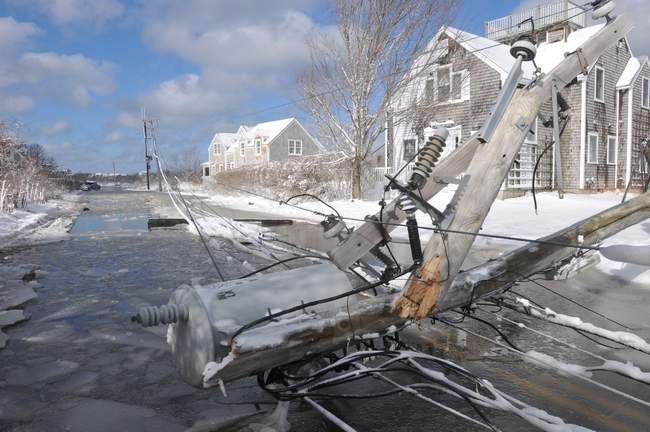 Downed wires on Nantucket as the island recovered from a blizzard in 2015. The Cape Cod Times Needy Fund has established a new organization to help people affected by major disasters. Steve Heaslip/Cape Cod Times file

The Cape Cod Times Needy Fund has launched a disaster response organization “to provide humanitarian aid to local individuals and families,” according to a statement from the organization.

The Cape Cod and Islands Major Crisis Relief Fund has been in the works for a few years, and the process was sped up after the devastation from Hurricane Sandy, said Judy Scarafile, the managing director of the relief fund and former president of the Cape Cod Baseball League.

“On the Cape and Islands we have experienced fierce hurricanes, epic winter storms, and significant beach erosion,” Scarafile said.

The fund’s goal is to raise $1 million, and it plans to work with other agencies who do similar work, like the Federal Emergency Management Agency, the Salvation Army and the American Red Cross.

“We will continue to collaborate with our many colleagues as part of an integrated approach to crises,” Scarafile said. “At the same time, we realize that significant needs of many local individuals and families are now unmet by traditional forms of public and private disaster aid and that’s where we step in.”

A committee formed to create the fund has been meeting for nearly three years, Scarafile said. During those meetings, Hilary Greene, the executive director of the Cape, Islands and Southeast Massachusetts chapter of the Red Cross, and other agencies went over what is already done for disaster relief so the Major Crisis Relief Fund could learn their roles.

“The Red Cross is the first people there,” Greene said about disaster response.

After the initial efforts, the Red Cross could send people in need to organizations like the new fund, she said.

“They’re really trying to fill a gap,” he said.

The fund plans to provide assistance in the form of financial aid for food, transportation, housing, medical services, child care and other needs. That could mean helping someone pay for a rental car get to and from work if, for example, a flood washed theirs away, Scarafile said.

The organization’s board of directors includes Needy Fund board members, local emergency response professionals and an advisory committee, according to Peter Meyer, president and publisher of the Cape Cod Times.

The use of the fund will be considered when 50 or more families or 100 or more individuals are affected by a crisis, according to the statement. The crises need to either have been declared a local, state, or federal disaster; require multiple hospitalizations; or trigger the opening of all Cape Cod evacuation shelters.

“This is just in case, or when, the big one hits,” Greene said. “Here’s a local funding arm.”